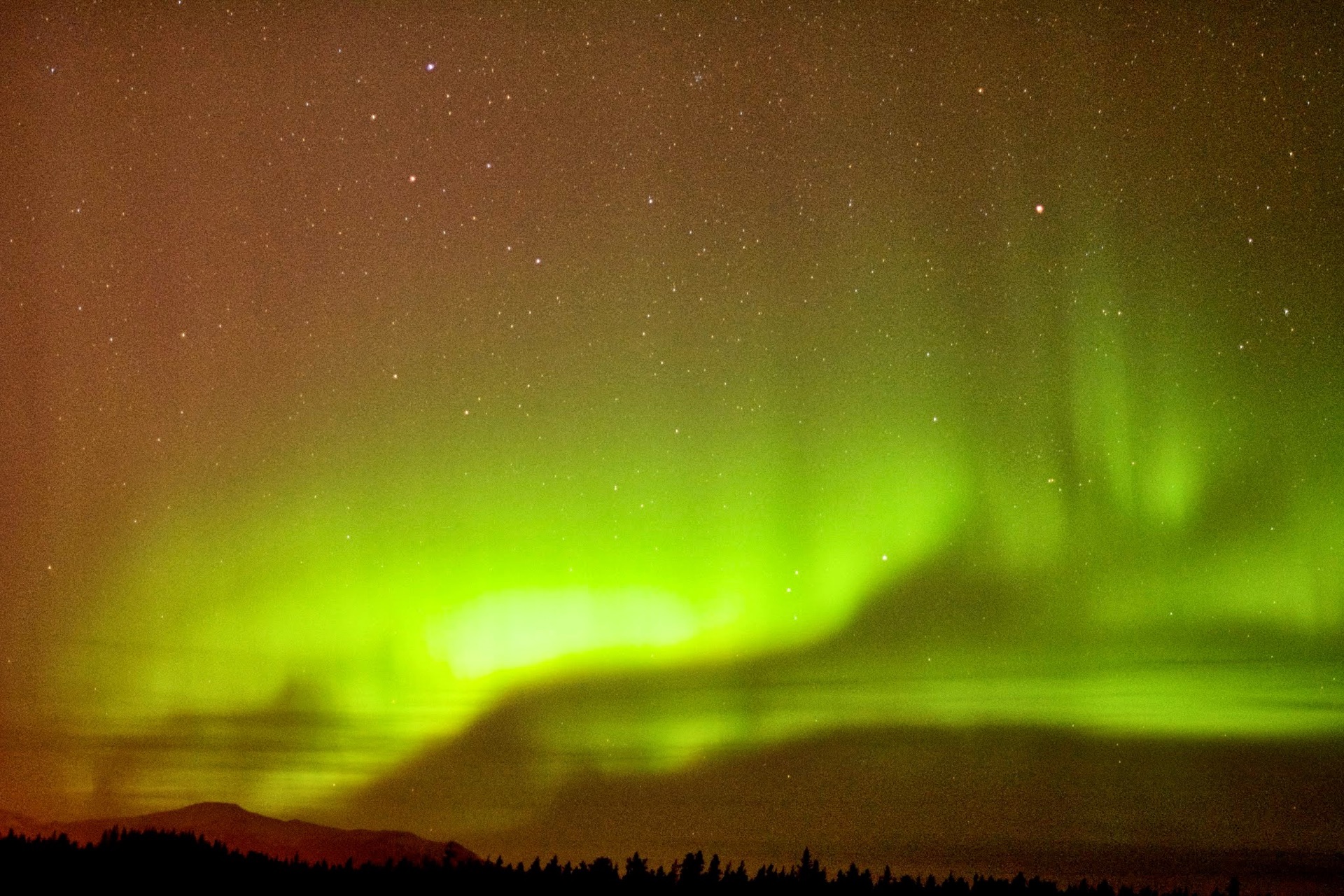 I’ve not posted for a while (been having too much fun to stop and type!), but wanted to share my findings of my first attempt at trying to photograph the Northern Lights from Whitehorse last night, and show off some of the more successful images. It was the first time I’ve ever seen the aurora, so I was keen to capture something to remember the night.

I thought that I was going to be freezing cold, so layered up with my running gear as a base layer; lugging a bag full of camera equipment up a hill, I expected to get a bit sweaty so didn’t want a soggy cotton base layer reducing my cold endurance.

I then had a cotton t-shirt, jumper, hoodie, fleece and a breathable but windproof Rab rain jacket on top – having done some night walking, it’s all about reducing potential sweat chill whilst keeping air tight. I wore running gloves as they are warm but very thin, which makes using the buttons on the camera possible without having to de-glove at any point. Thick walking socks and winter walking boots kept my feet away from the icy ground.

That combination kept me comfortable for the ~2-hours that we were out, despite the temperature being a solid single figure negative the entire time. I wasn’t even cold when we headed back (but the others had had enough!).

. Whilst the focal length is longer than ideal for this type of photography, I’m only carrying that and a Nikon AF-S DX NIKKOR 55-300mm f/4.5-5.6G ED VR Lens

, which whilst being an excellent, versatile lens, wasn’t as fast as I thought I’d need for night shooting, and the 50mm has a marginally wider angle.

I mounted it on my Manfrotto 732CY tripod (no link as it doesn’t seem to be on Amazon any more…), which I have fitted with a Manfrotto MH293A3-RC1 293 Aluminium 3 Way Head with RC1 Quick Release

. I’m glad that I opted for a lighter model, as it’s been everywhere with me in my rucksack since I left the UK.

, which has survived well so far during my travels despite being a bit of a trendy city bag rather than a rugged kit lugger.

, which is useful if you want to take shots without camera shake and don’t want to configure the shutter delay in-camera every time, or hold the shutter open to experiment with exposure times. This model also has an LCD display and programmable shutter timer, which makes time lapses easy; you set up the interval and duration of shutter openings, press the Start/Stop button and let it do its thing.

Disclosure: All of the above product links are via my Amazon UK referral links, so if you click through and buy something I get money from the referral to further my travels and gadget purchases. 🙂

Lastly, don’t forget to fully charge, and take spare batteries if you’re going to be out there for a while. The best time to shoot the lights is on cold, clear nights, and the cold does affect the performance of batteries. You won’t get as long out of them as you would in milder conditions, and some recommend putting your batteries in your pocket until you need them when it gets really cold.

First off, remove your lens filters; you’ll get some annoying moiré on long exposures if you don’t for reasons I won’t go into here (if you’re interested look, up diffraction interference patterns).

After some playing around in full Manual mode, I used the following settings for most of the best shots:

Shutter Speed: 3″ – 6″
(only possible with fast lenses, I’ve heard that 30″+ can work for slower lenses but you’ll get star trails and the aurora won’t be as crisp over about 15″)

Enough of this, where are the pics?!

Here are a few of the best. Back indoors I can see that some are pretty noisy due to the high ISO, and it got worse throughout the night as the camera warmed up. I’m pretty pleased with the results for a first try though, let me know what you think in the comments.

6 Replies to “Photographing the Aurora Borealis”