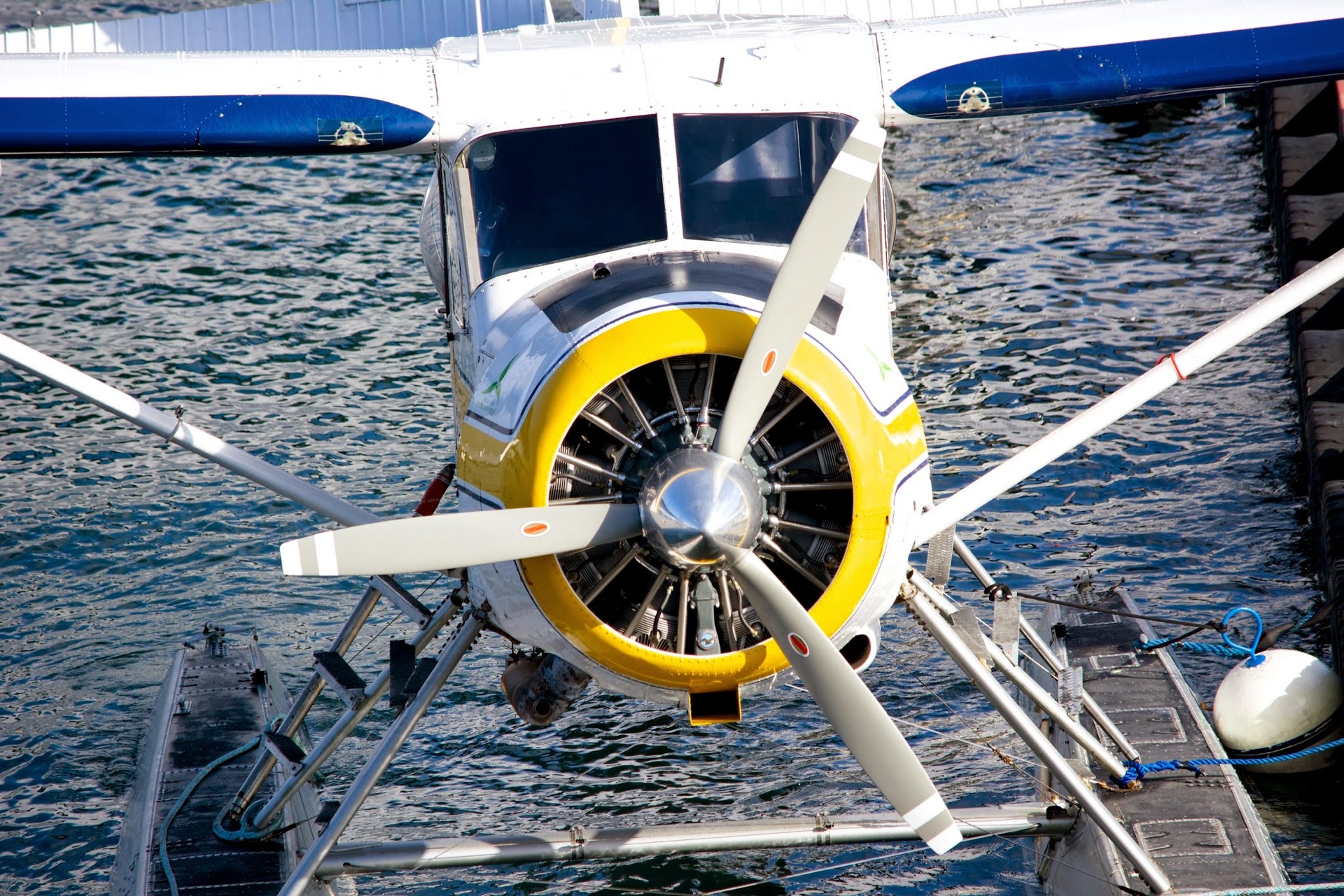 Having arrived here on Thursday, I thought I’d post a few topics that I have found to be notable from the past few days. These aren’t necessarily highlights, nor is it an exhaustive account, but instead some general first impressions of the place from someone who has never been here before. Here goes: 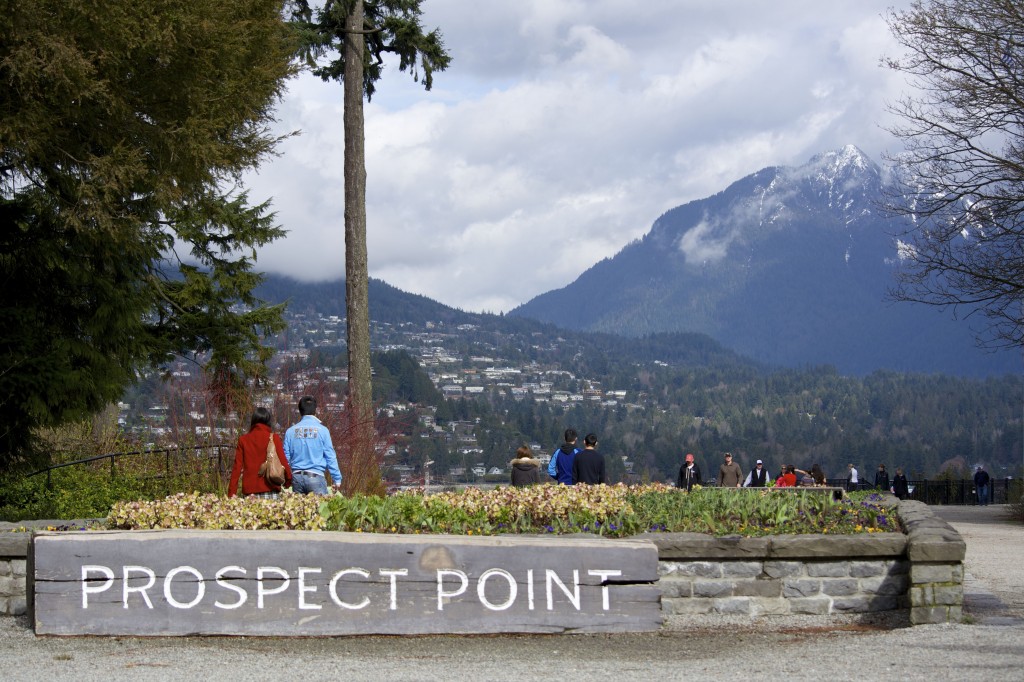 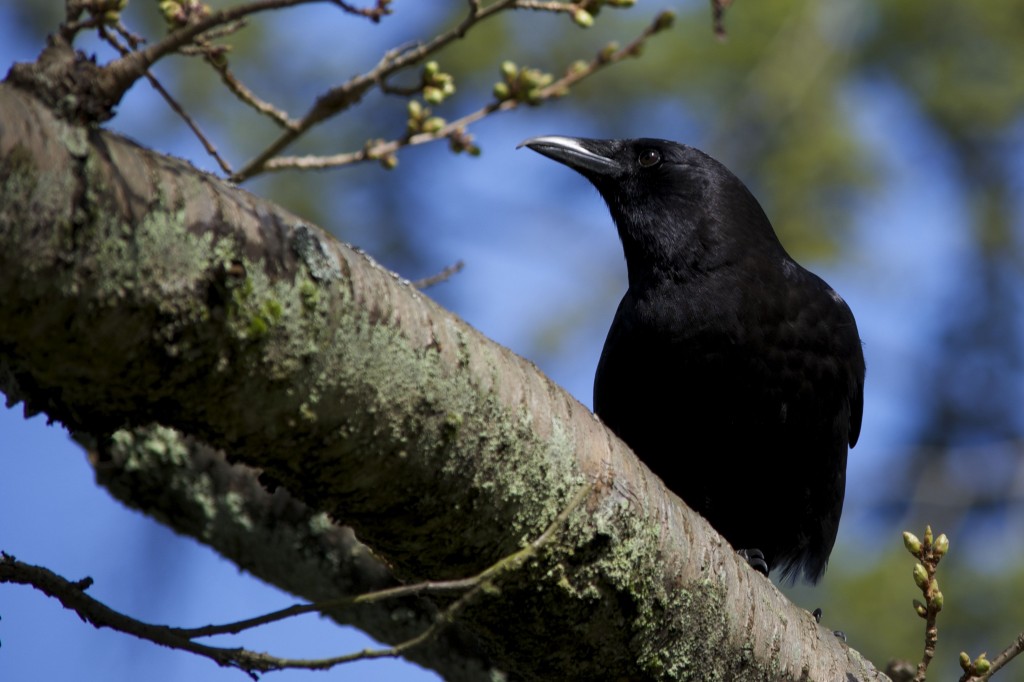 It is safe to say that this place is no secret as every tourist brochure virtually screams about its loveliness, but that fact does nothing to dilute the beauty of this little oasis of nature nestled alongside the downtown part of the city. The first full day that I was in the city was spent wandering the seawall from Canada Place to the Lionsgate Bridge, where I cut in past Beaver Lake and walked uphill toward Prospect Point Café; a cozy spot with a great view and a log burning fire. I still find it surreal to have this type of setup in the midst of a city; you really couldn’t ask for much more if you’re after an outdoorsy lifestyle with the comforts and luxuries of modern life.

How are you today?

I am loathed to use stereotypical comments about nationalities in general (indeed the mere thought of it causes me pause and the need to obsessively adjust my monocle between sips of Earl Grey), but to not say that the Canadians are a broadly polite bunch would be to omit one of the most unmistakably pleasant aspects of the Vancouverite that I have witnessed so far. I had breakfast this morning with a new group; one German, one Czech and one Japanese, and we were unanimous in our recognition and admiration of the way that everyone in this city genuinely seems interested in how you are today. I am not talking about that forced, scripted fixed smile that you get in certain parts of the USA, but a sense of genuine interest. It is completely at odds with what I am used to in the UK, where eye contact is generally frowned upon, and people look at you at best quizzically when you say good morning, and at worst think you are about to mug them (though maybe that’s just my face…).

This is so noticeable that I would be neglectful to not mention it: there are homeless people everywhere in downtown Vancouver. Having discussed it with some people in the city, including one helpful homeless bloke called Patrick (who I mention below), it seems to be the climate that brings those without fixed abode to lie on the streets of this picturesque coastal city. It doesn’t take much figuring out, as at the time of writing Vancouver is one of only a handful of places in Canada where the temperature is currently above freezing, and the causes of them getting there in the first place are the usual combination of rising house prices and lack of unskilled job availability. Hopefully the plans that the city have for the area will improve that in coming years. 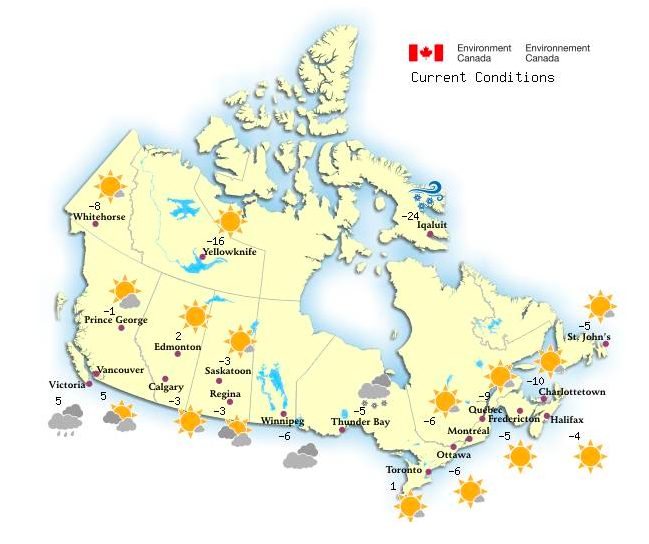 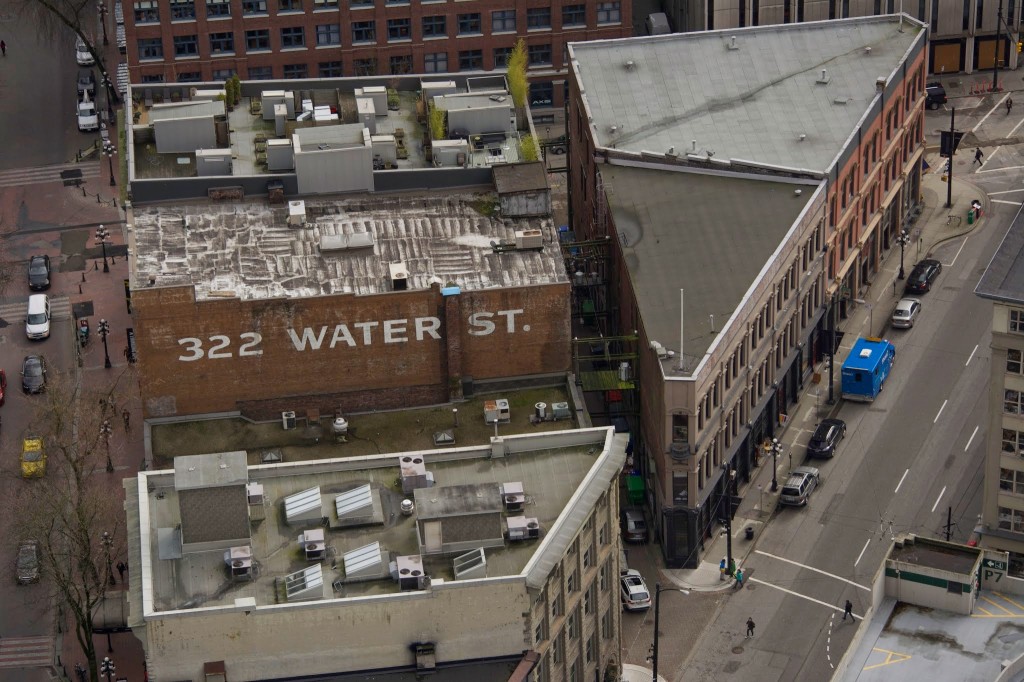 If they don’t call this the Shoreditch of BC they should, albeit a cleaner less “tagged” version (it seems that Vancouverites aren’t big on graffiti). Bearded hipsters: check, ‘custom’ fixie bikes: check, ironically-named coffee bar called Coffeebar: check, MacBooks and chai lattés everywhere: double check. It doesn’t quite have the edginess that London’s version of a faux-rough neighbourhood has though, and as the oldest part of Vancouver has touristy relevance that I can only imagine irritates the digital natives that dwell there. The barista in Coffeebar wasn’t even able to maintain her fixed expression and deeply trendy nonchalance throughout the entirety of our commercial interation, delivering my drink and snack with a sudden smile. No, no, no, that’s all wrong. You just wouldn’t stand for that sort of politeness in Shoreditch. I didn’t dwell in the coffee shops there for long, and dodged through a flashmob practicing on the pavement outside (yes really, I hadn’t ever though that they did those, isn’t it cheating?), and headed east further into Gastown.

Note
After a few comments saying “dude, why do you hate Gastown?” I thought I should add: I don’t! In fact I really like it! To me it’s like a cleaner, nice version of a part of London that I also like! No hate, just a healthy dollop of sarcasm.

Except it wasn’t Gastown that I was looking at, it was Downtown Eastside.

I can’t claim to have been completely unaware of Vancouver downtown’s notorious rough district, but I wasn’t sure exactly where it was or whether it was as bad as the locals made it out to be. I headed south west, and met a homeless chap called Patrick walking the other way. We had a good chat, he immediately clocked my accent as English and guessed that everyone will assume that I am Australian (eerily accurate, as I’d been asked what part of Australia I was from in the FatBurger in the Harbour Centre earlier that day).

We had a good chat, he told me his mother was a war bride of a RCAF ground crewman based in Winchelsea, East Sussex; his patter was good, and the details were accurate enough to not just be bullshit, and it beats the usual begging with a cup approach, so I gave him a few dollars for some soup and socks at the nearby community centre. I am not naive enough to assume that is definitely where the money went, but the way I see it he earnt it by giving an Englishman some good Gastown tips (he pointed out a few English-owned pubs in the area that will give you a free pint if you show UK ID!), and his warning to definitely not to go the other side of Cambie Street, and if I was curious to see what it’s like, not to go alone. Ideally drive through it. I thanked him and walked on.

I went right through an alleyway between two trendy shops and was immediately faced with a scene so completely at odds with where I just was moments before. You literally go through a doorway at the end of an alley and go from trendy coffee shops to two people smoking crack whilst leaning on a shopping trolley, in broad bloody daylight! Prime location for some edgy street photography, but Patrick’s warning, my conspicuously bright orange Rab jacket and the fact that I was carrying some expensive kit meant that I didn’t think it was the best time to rock out the Nikon 55-300mm and poke it in some junkie faces. Mark one eyeball then was my camera.

I zigzagged southeast, past a few seriously sketchy looking “hotels”, lots of boarded up windows and a few people thinking that shirt buttons were optional whilst walking down East Cordova Street. It is definitely less plush than Gastown, but it wasn’t exactly on par with a scene from The Wire. Rough, it seems, is relative, and I got out alive without any bother. It just goes to show that you shouldn’t always take doom and gloom warnings at face value, and if I hadn’t gone I wouldn’t have seen how stark the change is when you cross the road back out of the district; it is as if there’s an invisible forcefield surrounding DTES, as the opposite side of the road is completely different at the boundary.

I discovered this place by accident after walking a loop of False Creek, and I am so glad that I did. It has an upmarket seaside vibe, with seafood restaurants and little boutiques. Crucially for me it has an outdoor shop, so I was able to buy some Nikwax for my walking boots – so far the only thing that I have found that I need and have forgotten, and if that really is all I omitted I consider myself lucky! 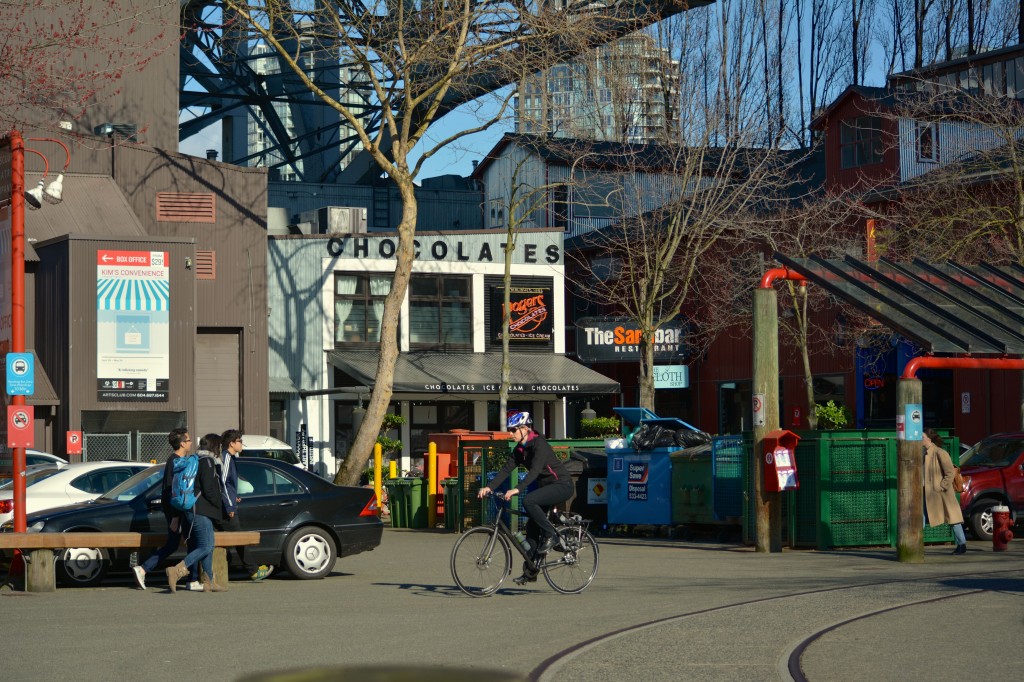 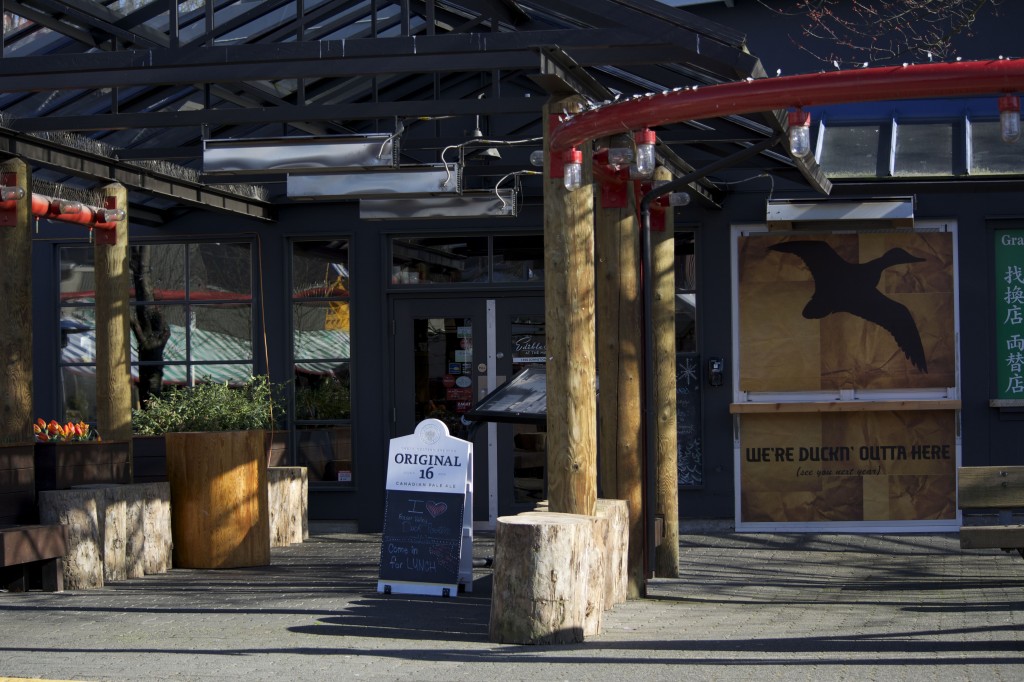 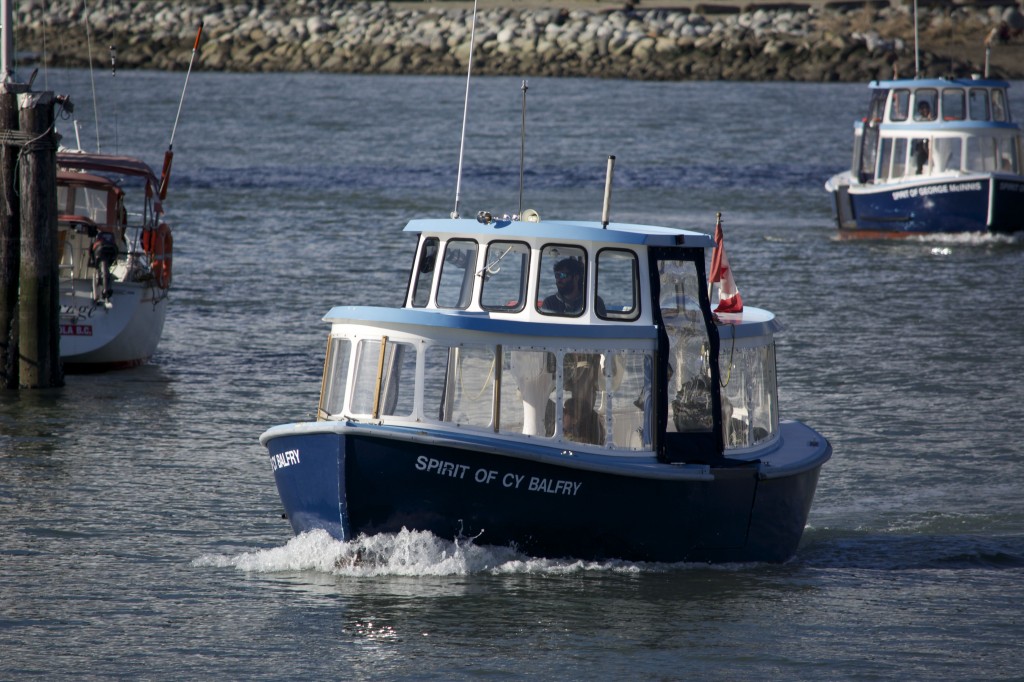 One Reply to “First Impressions: Vancouver”